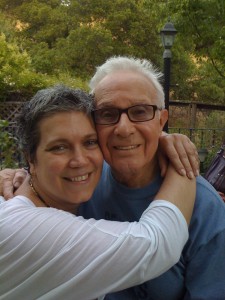 I’m not religious. I’m not against religion. Sometimes I wish I was because I know I would feel some comfort in hard situations that life bring to us. What I really believe is that everything happens for a reason, and this makes me find some of the comfort I miss without a religion.

Yesterday we went to a fundraising at Terri’s house, in San Rafael. Larry and his band played music the whole day. Kirk, Ana, Fernando, and some other friends also played or sung. We had Robert Strong doing a fantastic magic show. We had some silent auctions, too.

Good food, good drink, good friends, all together for only one reason: trying to help somebody who is going through the hardest phase of her life. Lisa is Terri’s friend. She lives in England and has stage IV ovarian cancer. She has 4 children between 12 to 21 years old – the 3 youngests are girls!

Her father, Albert, was there yesterday. A handsome little man, with sad blue eyes – it was when I dove into his eyes that my heart got trapped!

Albert lost his first wife to breast cancer 30 years ago. Later, he lost one daughter to cancer. 5 years ago he had lymphoma, with a reincidence after 3 years of remission. He’s doing good now.

Really? How good can you do after go through all that and when you have to stand there watching your second daughter dying right in front of your eyes? And there’s nothing you can do…

I spent most of the day with him. Talking, listening, joking, singing, but most of all, trying to give a little bit of comfort to that pair of sad blue eyes.

A lot of times I had to go away because I felt my heart shaking… I cried a lot while listen to him. I cried a lot hugging him and just because I could not do anything to help that man to feel better!

Today Albert called me to let me know he just have talked to Lisa. He wanted her to know about the couple he met yesterday. He told her the hugs and the tears made his heart feel warmer.

Albert called to give me one reason, at least one, why I had to go through breast cancer…